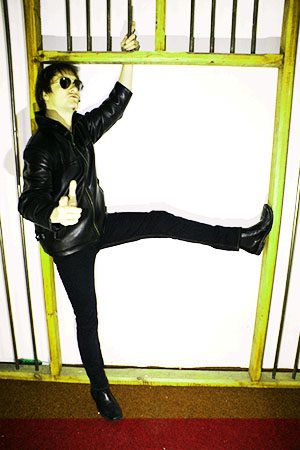 Pick Up On My Mojo

Black Cat Bone Will See Me Through!

When I first started out, I remember answering adverts in Melody Maker from people looking for guitarists. You were never really quite sure.. could be Bob Dylan for all I knew. Might be some top chart act looking to recruit, a record company forming a band for a top touring outfit.

Like most guitarists beginning in the rock’n’roll game, you needed belief to get going, but without hope you could not survive.

I called a number in Camden, London and spoke to a lady who was ‘representing’ Papa George. I didn’t know it at the time, but he was kind of what I would eventually become – so my audition was set for that Saturday afternoon at a central London rehearsal room.

My guitar then was a Washburn Falcon, a tremendous Sunburst colour and the reason I bought it was because Stan Webb (from Stan Webb’s Chicken Shack) had just started playing them. I used to follow Stan around London, going to all his shows at venues like the Half Moon Putney, Fulham Greyhound, Croydon Cartoon Club, Bridge House in Canning Town. Anyone who knows Blues or especially British Blues, knows about Stan Webb.

Papa George said ‘plug in over there’. I plugged in and waited. Then he said ‘this ones in C – do you know what that is?’ I nodded. ‘Good start!’ he said, with a hint of a smile.

I was wearing black winkle picker ‘Chelsea’ boots, straight black jeans and a purple/gold silk paisley shirt from Carnaby Street.. plus a dark grey overcoat from an American retro shop in Covent Garden. All this was hip, trust me. The song started and turned out to be a version of T Bone Walker’s ‘Stormy Monday’.. only the tempo was mid and maybe 100bpm.. (normally it is done as a ‘slow blues’ around 65bpm) and it had the extended chords you hear in the original and jazz versions – fortunately, I was wise to the chord progression (along with a heck of others)  from 6 hours practice a day for four years.

We finished and Papa George said ‘that’s good, Sammy will be in touch’. So I unplugged, packed up and walked out.

The next day Sammy called back and she said ‘Papa George liked your style and wants to offer you a guitar role in the band’ I said ‘what happens next then?’

She said ‘Come down to the studio this Thursday for 1pm’.

I never did make that session and it’s a thing I came to regret, which is odd because I do not do ‘regrets’.

Things happen for a purpose, a reason – they must do! Otherwise, it could all be downhill at any moment.

Papa George was always playing around town and he seemed a successful band leader, so it made perfect sense.

Only I never thought of it at the time.

If I had thought of it then maybe I wouldn’t have had to take the next twenty years, learning lessons that I could have learnt in one or two years.

Twenty odd years? – that’s the kind of time you want to be saving, if you can.